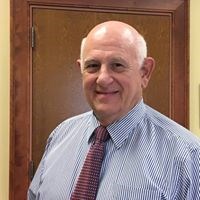 The License Commissioner in Mobile County is responsible for many aspects of licensing for the State of Alabama.
Those duties include: Motor Vehicle titles, tags, Manufactured home registrations, Drivers license (renewal only), Conservation permits, State / County Business Licenses, and Sales / Use-tax collections. The License Commission provides approximately 57% to the General budget of Mobile County. There are five (5) offices to serve our citizens.
Commissioner Matranga's goal is to serve the people of Mobile County with integrity, efficiency and accuracy. He states, “We want to make the experience as fast and pleasant as possible.”

Commissioner Matranga was born and raised in Mobile. He is a 1965 graduate of McGill High School. After graduation, he enlisted in the United States Marine Corps and rose to the rank of sergeant. He applied and was accepted to Officer Candidate School, Quantico VA, and was commissioned a Marine 2nd Lieutenant in March of 1971.
After completing flight school on December 19, 1972, then-1st Lieutenant Matranga was designated a Naval Aviator. Subsequently, he became a qualified A-4 pilot and later commanded two squadrons. Commissioner Matranga retired at the rank of Colonel after 31 years of active and reserve service.

Commissioner Matranga’s civilian aviation career began as a pilot for Capitol International Airways, where he flew the McDonald Douglas DC-8 in worldwide operations. After Capitol Airways ceased operations in 1984, he was then employed by TWA. He retired from American Airlines in March of 2007 after TWA merged with American. On November 8, 2016, he was elected to the Office of Mobile County License Commissioner for a four year term.
Commissioner Matranga earned a Bachelor of Science degree from Middle Tennessee State University and a Master of Science degree from Central Missouri State University.

Commissioner Matranga resides in the City of Mobile with his wife Audrey. He has two sons Brian (wife Katya grandsons Edward and Jeffrey) and Brad.